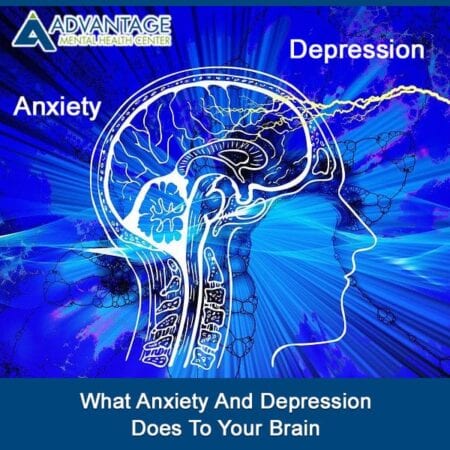 is a debilitating disease that runs rampant in today’s world. It affects nearly 4.4 percent of the world’s population, a shockingly large number when looking at the size of the world’s population of 7 billion people, and the numbers keep growing. The disorder’s prominent status in society is followed closely by that of anxiety. Both disorders can deeply affect the life of the sufferer. The two psychiatric diseases pose a major concern for neuroscientists seeking to understand and find answers for sufferers of the disorders.

The great concern surrounding depression lies in its effect on the brain. Studies have shown that the condition causes the memory hub of the brain – the hippocampus – to shrink. While this may initially manifest as poor memory, it becomes far more problematic later in life. The presence of a shrunken hippocampus has become linked to the development of Alzheimer’s Disease and dementia in patients with neurocognitive disorder.

In the past, there have been fewer studies of the relationship between depression and anxiety when it combined in patients. However, more recent studies are taking steps to analyze the effect this comorbidity of the two disorders might have on the patient. Comorbidity of the two conditions has grown in concern as the conditions’ presence increases in society, particularly as the presence of both diseases in a patient have been noted to lead to poorer health and suicidal ideation.

New data has begun to show that there is a detrimental relationship between memory and emotional functions in patients who have both conditions. In tandem, the disorders are found to sharply impact brain volume of the brain’s amygdala – the part of the brain that controls the Fight or Flight reflex – while the hippocampus does not lose any significant volume.

These findings suggest that when both conditions appear in a patient, the effects of depression on the brain’s volume is reduced. A trademark side-effect of an anxious mind is overactivity, and in terms of the comorbidity between the two disorders, this means that more connections are made in the brain, allowing the brain itself to grow larger, rendering the effects of depression less evident on the hippocampus. However, the resulting effects of anxiety on the brain can pose an issue in identifying any shrinkage that may have already occurred in the brain.

The worry that arises from such findings is that the growth of the amygdala and the resulting effect on the hippocampus might hide any shrinkage that has occurred in the hippocampus. The difficulty in treating the conditions is enhanced by the possible masking of the shrinkage in the brain. There have been many calls to continue studying the relationship between the two conditions in order to better understand their individual effect on the patient’s brain.

It is essential for neurocognitive disorders like the aforementioned conditions to be studied in-depth both as individual diseases and the roles they play in the brain when present with another cognitive disease. Many people suffer from both conditions at the same time, and science must catch up to understand the effect the disorders will have on society.

Mental health plays a major role in the long-term health of an individual and finding treatments to prevent the acceleration and potency of neurocognitive disorders later in life is essential to creating an overall healthy disposition later in life. Treating mental health disorders when they arise is essential to protecting and strengthening the mental well-being of the patient. Advantage Mental Health Center helps patients learn to cope with their condition and learn to understand the effects of any cognitive disorders on their lives.