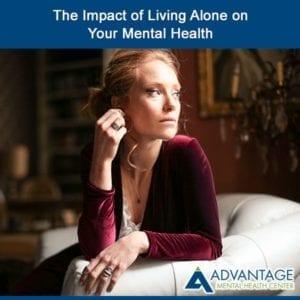 In a recent study that was published in PLOS ONE Journal, researchers looked at the links between mental health and living by yourself. According to this study, living by yourself is linked to many common psychiatric issues including anxiety, mood disorders, and substance abuse issues. These are conditions that about one-third of people will face in their lifetime and that will significantly impact them, as well as society itself. The conditions affect people of all ages and genders equally.

Throughout the Western world the number of people who live by themselves is steadily increasing for many reasons such as an aging population, increased divorce rates, and people waiting until later in their lives to get married. Studies have concluded that these people are more likely to develop dementia.

While earlier studies focused on people developing depression, they didn’t quantify factors such as people being more overweight, smoking more, using drugs, and not having social support. The authors of this latest study wanted to also take these things into consideration to see which of them influenced the relationship between living alone and developing mental health issues.

This study’s researchers were from the University of Versailles Saint-Quentin-en-Yvelines in France. Together they looked at the data from 20,503 adults between the ages of 16 – 74 who participated in three national psychiatric surveys that were conducted in 1993, 2000, and 2007. These studies included questionnaires that assessed whether the participant experienced any neurotic symptoms throughout the course of the previous week. It also took into consideration variables including height, weight, education, employment, social status, drugs and alcohol use, and their feelings of loneliness. Researchers expected they’d find that the number of people who live by themselves would increase, which it did from 8.8% in 1993 to 9.8% in 2000. Throughout all ages and genders who lived by themselves there was also a lot more psychiatric disorders – something that also increased from 19.9% in 1993 to 24.7% in 2007.

Why Loneliness is Such a Problem

Loneliness is the root cause of many mental health issues. While we can easily understand how it’s linked to depression and anxiety, there’s some studies looking at how it also increases a person’s mortality risk. This is important today as we’re undergoing a “loneliness epidemic.” However, we must be careful to understand that not everyone who lives by themselves is lonely. We should also understand that there are interventions available for those who are lonely – including talk therapy, social care provisions, and animal-based interventions.

Unfortunately, it can sometimes be a challenge to help people who need access to these tools get this help for their mental health. However, if you are living by yourself and find that you’re struggling with mental health issues, make sure you seek some help today. One of the best places to do so for residents of Clearwater, Florida is at the Advantage Mental Health Center. Over the years they’ve helped many people feel better emotionally and they look forward to helping you as well.