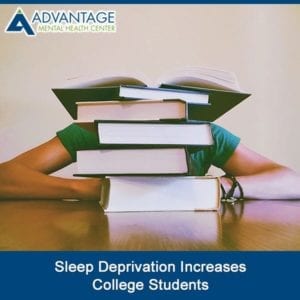 There was a recent research study into how sleep disorders affect the mental health of college students. This study looked at how not getting enough sleep caused these college students to suffer from things like anxiety, depression, and other issues. In fact, there is believed to be a close relationship between a lack of sleep and all mental issues. This is something that was closely reviewed by the information that was collected by the National College Health Assessment (NCHA). It’s also something that the UA Sleep & Health Research Program’s research assistant, Thea Ramsey acknowledged. This program is part of the University of Arizona in Tucson.

According to this study student athletes are the least sleep deprived. They got more sleep than anyone else and this showed in the fact that their mental health was much better than those students who weren’t athletes. However, the relationship between sleep and said issues was similar between those students who were and weren’t athletes. This is something that Ramsey and her colleagues reported at the annual SLEEP 2019 conference, which is hosted by the Associated Professional Sleep Societies (APSS).

An In-Depth Look at the Survey

Researchers pulled the data that they analyzed from 110,496 college students who agreed to participate in their survey between 2011 – 2014. Included within this wave of surveys the NCHA conducted were 8,462 students who identified themselves as being varsity athletes. Regardless of whether or not they were athletes, all of the students who participated in this survey were asked approximately how many nights they felt like they didn’t get enough sleep, leaving them waking up in the morning feeling as though they weren’t well rested.

In another question the same students were also asked approximately how many days within the previous month they felt hopeless, overwhelmed, exhausted, lonely, sad, depressed, anxious, angry, suicidal, wanted to engage in self-harming behaviors, or found it difficult to function normally. Researchers also asked for the students’ age, gender, ethnicity, and made note of what year they took the survey in.

Once all this information was gathered, they used logistic regression modelling to review the entire sample and interaction terms for the survey. In doing so, researchers discovered that students who reported that they suffered from a sleep disorder also reported that they had more mental health variables to contend with. When this was further analyzed, some linear trends were discovered that showed that these students were more likely to feel hopeless, overwhelmed, exhausted, lonely, depressed, anxious, or angry. They were also more likely to have functional problems, engage in self-harm, or become suicidal.

Michael Grander, PhD is the director of the UA Behavioral Sleep Medicine Clinic. He also helped to co-author this study. In doing so he found that students with sleep disorders (something that he found to be an epidemic among college students) not only did worse when it came to their academic performance, but they also had worse overall health. He believes that this demonstrates that sleep health is very strongly related to mental health – something that’s important because most college students don’t get the recommended amount of sleep that they need to have good health and function well.

When you’re suffering from a sleep disorder that has caused you to have some mental health issues, you’ll want to know that there’s someone whom you can trust to turn to. Fortunately, there is. You can trust the Advantage Mental Health Center in the same way as many others have done so in the past. They’re on their way to a healthier life and there’s no reason you shouldn’t be too so contact them today.