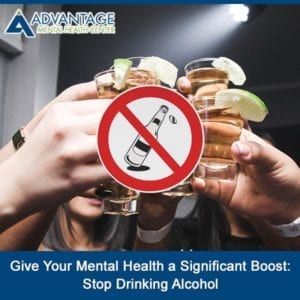 Today there are many people who drink socially or have a glass of wine or beer with their dinner after a long, hard day at work. The effects of this type of drinking is something that people have been debating for years now. At the core of this debate is the affect alcohol has on a person’s mental health. Now recently the University of Hong Kong (HKU) published a study in the Canadian Medical Association Journal suggesting that when you stop drinking, you’ll reach the same level of well-being as people who have never had a drink in their life – especially if you’re a woman.

There are many varying opinions about whether it’s safe or healthy to drink any amount of alcohol. The Lancet published one study arguing that moderate drinking increases a person’s risk of developing cardiovascular issues. Yet another study in the journal Alcoholism: Clinical and Experimental Research says older adults who occasionally have a drink live longer than those who abstain.

Issues also exist when it comes to alcohol’s effect on a person’s mental health. Although doctors realize that drinking too much alcohol isn’t good for a person, they aren’t yet certain whether those who have an occasional drink would be better off abstaining as well. There are also some doctors believe there’s evidence that moderate drinking should be included as part of a healthy diet.

A Closer Look at the HKU Study

In this study data was collected from 10,386 participants whose mean age was 49 years old. About 56% of the participants were women and of these women about 88% were nondrinkers. Once the information was collected it was then analyzed. Each participant reported that they either abstained from alcohol or drank in moderation (14 drinks or 196g of alcohol or less per week for men and 7 drinks or 98g of alcohol per week for women). There were people who drank alcohol in the past, some who’d recently started drinking, persistent drinkers both now and in the past, and people who’ve always abstained from alcohol. The number of nondrinkers in this study was about 64%.

As part of the study researchers examined the link between drinking alcohol and a person’s mental well-being. This information was then compared with the 31,079 people who participated in a similar study that was conducted by the National Epidemiologic Survey on Alcohol and Related Conditions. Both studies lasted for four years and included alcohol measurements at two different time points. The first time researchers observed that people who never drank any alcohol had the best mental health. The second time they realized that people who quit drinking, especially women, saw a great improvement in their mental well-being. This is something that was reviewed according to a 100-point scale. Doing so helped them to see that women who previously drank alcohol but have since stopped doing so averaged 1.44 points greater than those who never drank any alcohol at all. These results remained steady even after the team adjusted for confounding factors like socioeconomic status, BMI, and whether the person was also a smoker.

Many people believe that there will be a continued increase in global alcohol consumption unless there are more effective strategies employed. In fact, globally alcohol intake has increased by about 70% in the last 30 years alone. Experts feel that this trend will continue in the future. This is why the HKU researchers chose to undertake their study and are now recommending that people either abstain or greatly reduce their alcohol intake permanently. If you need help with this or another mental health issue that you’re struggling with please contact the Advantage Mental Health Center. They’ve successfully helped many people regain control over their lives and look forward to helping you do the same.