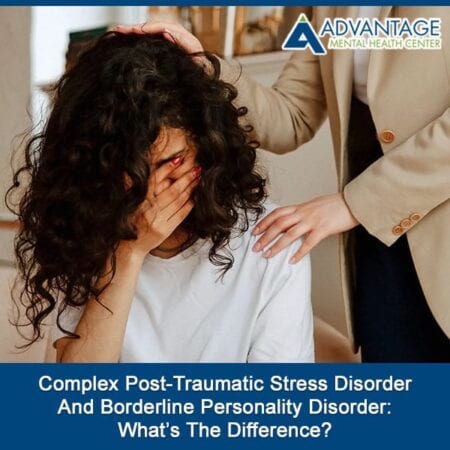 Mental health is complicated, and many disorders have overlapping symptoms. Disorders affect every person differently, so diagnosing correctly can take multiple attempts. Two very similar mental disorders are borderline personality disorder (BPD) and complex post-traumatic stress disorder (cPTSD). They’re both serious disorders with some similar symptoms and causes, but they have quite a few differences as well. Know the difference between cPTSD and BPD can help patients’ friends and family, as well as the patients themselves, recognize behavior patterns, and improve the quality of life.

Many people have a general understanding of PTSD as a disorder caused by a traumatic event. It’s most commonly represented in pop culture as something veterans suffer from after returning home. Complex PTSD is a type of PTSD believed to be rooted in shame rather than fear. Like PTSD, cPTSD often involves feelings of intense fear and flashbacks to traumatic events. However, it is also characterized by low self-esteem, sadness, and feelings of shame.

BPD is a very complex disorder, which means that understanding of its cause is somewhat limited. Experiences from patients vary widely, but some common symptoms are low self-esteem, feelings of emptiness, erratic behavior, and general emotional instability. Many patients with BPD are often first diagnosed with Bipolar II Disorder as the symptoms are very similar.

Causes of BPD and cPTSD

Both BPD and cPTSD can be caused by trauma, however, that is where the similarities end. The causes of BPD are not fully understood, and current research has shown conflicting answers. Current theories suggest that borderline personality disorder can be linked to childhood neglect, abandonment, and abuse, but there is also evidence that suggests a genetic component may make some people more at-risk to develop BPD than others.

cPTSD is believed to have similar causes to PTSD, the most common being long-term exposure to trauma. Like BPD, cPTSD is common in survivors of child abuse. Research has also shown that it is more common when the traumatic situation felt inescapable. Particularly relevant for those who suffered abuse from their parents, having to rely on their abuser has been linked to the shame felt by cPTSD patients.

Symptoms of BPD and cPTSD

One of the things that makes BPD and cPTSD easy to misdiagnose, is that many of the root feelings and symptoms they cause are similar. Patients with either condition both report feelings of low self-worth, difficulty with interpersonal relationships and communication, emotional outbursts with specific triggers, anxiety, depression, suicidal thoughts, and dissociation. However, one of the key differences between BPD and cPTSD is how patients react to these feelings.

For example, it’s common for patients with BPD and cPTSD to report struggling with the concept of their own identity. For those with BPD, this tends to present as feelings of detachment from their lives, feeling lost, or like they don’t know themselves. For patients with cPTSD, identity struggles are less rooted in need to discover one’s self, and more to do with being unhappy with who they think they are. It’s common for people with shame-rooted disorders like cPTSD to report feeling damaged by their trauma.

Issues with identity in BPD and cPTSD are often closely linked to self-esteem and interpersonal issues, but once again, the reactions to these feelings are often different for those with cPTSD compared to those with BPD. In cPTSD, these issues often present as the tendency to avoid interpersonal relationships altogether out of fear and shame. For BPD patients, it is more likely to present as a tendency to over socialize, or constantly surround themself with people to stave off feelings of abandonment. Patients with BPD are more likely to hop from a social group or hobby to another as they search for belonging and a sense of self.

Even admitting that treatment is needed can be a big step for patients. Finding quality care for yourself or for someone you love can be scary and stressful. A good treatment for any mental illness is a highly tailored process. Many patients with borderline personality disorder and/or complex PTSD have benefited from cognitive-behavioral therapy (CBT) which can help with controlling emotional outbursts. BPD is also often treated with a combination of CBT, traditional therapy, and medication. If you or a loved one need help with BPD, cPTSD, or other mental illnesses, Advantage Medical Health Center is here to help.